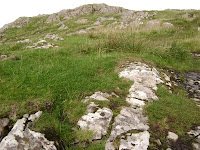 In this case, while I did not make it to the summit of the hill, I did make it safely back down again and me and my ankle are free to continue having further adventures, thanks to the still small voice of prudence.
Posted by kehf at 07:25