My daughter and I watched a lot of nature TV shows about human evolution. As a species, we seem to have been telling stories through art since the dawn of our time. Cave paintings, jewelry, body art, pigments, stone circles, and carvings are all things that have been left behind by human and proto-human societies.

We have a drive to make art, to tell stories, and to develop rituals that goes back to our beginning.

It comes to us at our end as well. One of the many things I learned as part of helping to take care of my mom during her last weeks was that it is common for people to start using metaphorical language. They talk about: going home, packing for a trip, or they might ask about their passport or airline tickets.

This happened to me when I was sitting with my mom in her last days. She suddenly asked me if she was all packed for her trip. Even though I had read the hospice guide many times over the previous week, I was still caught off guard by how clear and cogent she sounded when she asked the question. This was one of the few times I was unsure of what to say. However, since she seemed worried about it, I decided to address the worry and not the words. I told her that everything was taken care of and that she didn't need to worry. She relaxed after that.

Even though I had been prepared for the idea that Mom might use a journey or travel metaphor as she neared the end of her life, it still hit me harder than I expected. We had already had a lot of frank and sometimes difficult conversations about her coming death. She and I were able to talk about death and dying in a very straightforward (if sometimes darkly humorous) way; and, while it made me sad to reflect on losing her, I rarely had a problem talking about death and all of the related logistics. So I was surprised when I had such a strong reaction to Mom's almost unconscious use of metaphorical language to tell me that she was ready to go.

This past week, my husband heard from his parents that his grandmother has started talking about 'going home' and she pretty clearly isn't talking about trying to move back to her apartment from the nursing home.

It makes me both wonder and appreciate our human ability and need to tell stories.

Humans throughout the ages have made up stories to explain the world around them, we have created rituals to re-tell and re-enforce those stories. We use just about anything we can get our hands on to make art that tells stories. Even Jesus tried to communicate his teachings through parables, telling stories to try to get his disciples and followers to more fully understand what he was trying to say.

And when we reach the end of life, our minds, bodies, and spirits work together to tell one last story. The story of leaving everything behind and going on one final journey.

Neither Mom nor I really believed in an afterlife-- at least not the ideas of 'heaven' that seem to have grown up around Christianity over the past 2000+ years. Mom was a big proponent of living and working in the here-and-now. She said many times that we should be working to create heaven on earth and not be waiting around to go to heaven after death.

I don't have any good answers to what might happen after death. I don't know if Mom's spirit went anywhere or if she lives on only through the love of her family and the friends that remember her.

I do know, like millions before her, she set out on a journey and for once I couldn't go with her.

However, while she may be traveling beyond my reach on earth, I maintain my connection with her and with all of our human and proto-human ancestors by telling stories.

-------- Kristin Fontaine is an itinerant Episcopalian, crafter, hobbyist, and unstoppable organizer of everything. Advent is her favorite season, but she thinks about the meaning of life and her relationship to God year-round. It all spills out in the essays she writes. She and her husband own Dailey Data Group, a statistical consulting company.
Posted by kehf at 06:00 No comments:

Email ThisBlogThis!Share to TwitterShare to FacebookShare to Pinterest
Labels: Reflection

Why does my garden grow? 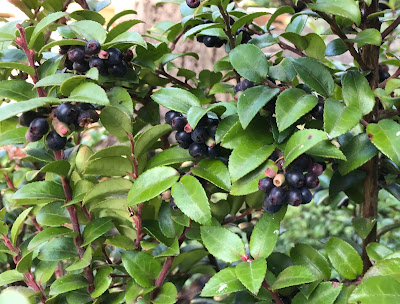 I have been fortunate enough to live in the same house for over 21 years; enabling me to completely transform our suburban yard into a haven for my family.

I turn 50 this year and have started to think about a two-pronged reality. One, even if I am lucky enough to live the classic four-score and ten, there are some plants that I will never see fully mature. Admittedly at my age, those are mostly trees, but still, the point stands. Two, if I ever have to move or when I die, I will leave my garden behind and the next people to live in our house might rip it all out and start over. Both prospects include melancholy (which my-dad-the-Buddhist would tell me is a sign of attachment and, likely, ego, so I probably should work on that). However part of the reason the idea of leaving my garden behind makes me sad is that it is not just a garden, it is memories of love made manifest.

Nothing in my garden beds or in the yard is planted just because I like it. Almost every plant has a second, emotion laden, meaning behind it's place in the yard.

The roses come from my Dad's attempt to keep roses alive in Wyoming winter after winter and from my husband's grandmother, who gave me a cutting from a rose that had been planted by my husband's, grandfather's, grandmother after she bought it from a peddler.

The twenty-plus evergreen huckleberry bushes come from my husband's side of the family. His grandfather would go huckleberry picking every fall and come home with gallons of berries to be made in to preserves for the coming winter. He had his own secret locations he would head off to each fall. Even when he needed two sticks to walk with he would climb into his truck and disappear for the day to fill his gallon buckets with berries.

The herbs in pots on the deck and nestled in some of the flower beds were planted when my daughter wanted to have an herb garden. I've continued to keep them both because they remind me of her and since I have started to do a lot more baking and it seems _right_ to have herbs to use.

There are many more, for as I say, all of the plants have a meaning beyond the fact that they are native, or good for bees and hummingbirds.

My plants allow me to commune with memories of my past, remind me of the contribution others have made (and continue to make) in my life, and ground me to the hear-and-now with the continued care that they require.

Working in my garden, reforges connections with people who are dear to me. Weeding is never just weeding. As a work around the plants I want to keep, I automatically think about why I planted them, what I love about them, and what love inspired me to plant them in the first place.

In some ways it is my own 'Communion of Saints'; a place where I go to relive memories of past joys.

I hope, when it is time to put my trowel and garden knife down for good I will remember that, while I am leaving my physical garden behind, it is the memories and sense of connection to my family and friends that I have truly cultivated.*


*Though I do hope those who come after me keep the huckleberry bushes, because nothing else will grow very well under the big evergreen trees in our front yard and it takes 20 years to grow them from gallon- sized plants to three-foot tall bushes.